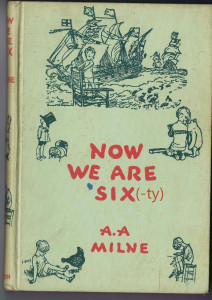 When I was a teenager my little brother was pretty sure I wouldn’t make it to 21.

When I was 28 a plane I was on had to make an emergency landing, and I was pretty sure I wouldn’t see 29.

For an infinitely long split second when I was in my early 30s I thought I had died in a bomb attack.

When I was 48 and I got word that my breast cancer had metastasized I was pretty sure that even if I should see 50, I certainly wouldn’t see 55.

Unbelievably, today is my sixtieth birthday. According to Auntie Wiki, some other things also happened in March of 1955. Jim Henson built the first version of Kermit the Frog. Fifteen-year-old Claudette Clovin refused to give up her seat on a bus in Montgomery, Alabama to a white woman, and was shackled, kicked and harassed as the police carried her away. Elvis Presley made his first television performance.  Peter Pan was presented on American television with the original stage cast.

Also in 1955: the Salk polio vaccine received full approval from the American Food and Drug Administration, Ray Kroc opened the first McDonald’s, and the first Hebrew-speaking Catholic parish was created in Israel.

Two years ago, I wrote:

It hit me suddenly today – I’ll be fifty-eight in two days. Will I live to see my next birthday? There is a good chance that I will not. The odds that I’ll reach the age of sixty are minuscule.

While I was writing today’s post I had a moment of clarity: for the last two years and a bit, ever since the bone mets started getting worse, I have oriented myself toward death. I’ve been thinking about dying, preparing to die, resenting death, accepting death, longing for death, running from death… I have allowed death to define me, have allowed this disease to define me.

A couple of weeks ago I was talking to my spiritual companion and asked him “How do you prepare to die?” “You don’t,” he replied and I sighed to myself. Doesn’t he get it yet? “You live,” he continued. “The question is how to live.” I dropped the issue because I was pretty sure he was clueless. I felt misunderstood and devalued.

Oops. As I’ve found over the years, it sometimes takes a while for important remarks to sink in. I rejected his remark off hand, but I was wrong. How to live is the question.  How to live a full life, “pressed down, shaken together and running over”, without slipping into that false positivity that is nothing more than denial, the permanent grin that is the mark of a bliss ninny. Instead it means that I accept what I cannot change (metastatic breast cancer) and change what I can – my attitude.

That is my challenge as I begin my seventh decade on this earth. I want to be in charge of my feelings, my attitude. I fully expect that I will have times of anger, frustration, depression, helpless feelings; of course I will. The difference is that I want to acknowledge the feelings and not let them be the boss of me. I have been working on this for a long time, as anyone who reads this blog regularly knows, but now I am going to make it more of a priority. I don’t expect it to be easy and I probably won’t be consistent at first, but that’s okay. I’ll be gentle with myself when I blow it and start again.

I think this is one the best things about myself. (It’s my birthday so I am allowed a little brag, right?) I am sixty years old, an age that for most of my life sounded so old, and I can still work on myself, change myself, accept criticism (albeit not immediately), and act on it. My body is stiff, but my spirit is still flexible. Happy birthday, me!