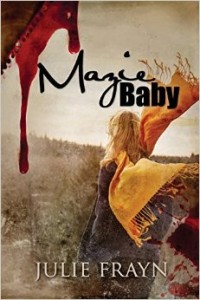 Mazie Baby is not an easy book; it treats the difficult themes of domestic violence, learned helplessness, identity and more. Never exploitative, it is graphic. Never maudlin, it is emotional. At certain peak moments in the story, Julie’s writing disappears, leaving no barrier between the reader and the character’s experience. There were points where I had to stop reading, look away, catch my breath, take a break before continuing.

There is a lot to love about Mazie Baby. You really ought to read it.

* Full disclosure: Julie Frayn and I are Facebook friends and if we lived in the same city (or even on the same continent) we’d be even better friends. However, Julie did not solicit this review, and if I hadn’t loved the book I wouldn’t have bothered reviewing it.

Bonus – A Chat with Julie

Julie, congratulations on Mazie Baby being named one of IndieReader’s Best Books of 2014! I completely agree with that decision. Who is your reader and what do you think are the main reasons for the book’s success with them?

Thank you, Knot! I’m thrilled that Mazie made that list. She also made Suspense Magazine’s Best of 2014 list, so I’ve been a little excited lately. I don’t need to look for motivation to write, but recognition like this puts motivation into hyper drive.

I am my reader. By that I mean, every woman, every person, the average adult slogging through the mundane bits of this life and grabbing onto all the joy they can, is my reader. Hm, that sounds like there’s no joy in my life. Quite the opposite.

I write my stories the way I’d want to read them, with a heavy dose of reality, because life is truly dramatic. My characters are real people that readers appear to relate to quickly. I think that’s the reason for Mazie’s success. Most everyone has either gone through what Mazie endures, or knows someone who has. Readers are cheering for her and wanting her to find freedom and happiness.

As the book opens we slowly learn about the dynamics of Mazie’s family:  her abusive husband, her teenage daughter and Mazie herself. Your portrayal of those dynamics, especially between wife and husband, took my breath away. I mean, I actually had to stop reading at a couple of points and put the book down to catch my breath. If you feel comfortable sharing about it, how did you get it so right? How did you develop that insight?

Well, I was married for eighteen years. It ended badly, as most marriages that end do. I was never physically abused but I know many women who have been, have heard the strained voices, seen the result of altercations that occur behind closed doors. Some of the conversations in that story are based on some in my own marriage, amplified for Mazie’s situation. Let’s just say I understand control, manipulation, jealousy and rage…

What else would you like to tell us about Mazie Baby?

I’d like to share a little about the cover. My sister, Carolyn Frayn, created the cover. The blood is made from beet juice and cornstarch. If it weren’t enough that she did that while enduring another round of chemotherapy after another diagnosis of more cancer (as you know, Knot, she has stage 4 metastatic breast cancer), the model for Mazie is my own baby girl, my perfect daughter, Brynn. That cover is very personal and I love it so much.

I hope Mazie Baby will be a cautionary tale for young women to recognize the signs of abuse and get out before it escalates. And a manifesto for women who are suffering every day.

Please tell us a little about your other books. And are you working on another one?

My first novel, Suicide City, a Love Story, is about a runaway farm girl who falls in love with a heroin-addicted street kid. My second, It Isn’t Cheating if He’s Dead won the Books & Pals 2014 Readers’ Choice Award. It tells the story of a lawyer whose schizophrenic fiancé is found dead after being missing for four years, and how she deals with her grief and finds love again.