From a Brother in Mets, Bill Becker

Bill Becker’s wife Lisa has made the heartbreaking announcement that Bill is taking the final steps of his journey. The end has come very quickly, much faster than expected. It is a shock. I don’t want to eulogize Bill after his death; I want to honor him while he still lives. Bill dedicated himself to spreading awareness of male breast cancer, so I would like to honor him by publishing again a guest post he wrote for the blog just one year ago, in August 2013. Bill, Lisa – I love you. 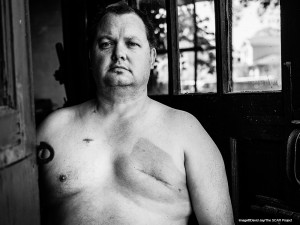 Don’t mind us…we’re just some blue in a sea of pink.

Imagine if you can, you’ve been told you have breast cancer. Any diagnosis of cancer is scary in itself. The lump that you’ve found has come back positive for breast cancer. A man in a lab coat sitting across a desk from you just read the results from a piece of paper that was faxed over from a laboratory that performed a test on a sample of flesh from your body. Now let’s change this up a bit, imagine the same scenario accept the ‘you’ in the scenario is a man.

As a man diagnosed with breast cancer there is very little information to guide all the men and women in lab coats with the most current and up to date methods for treating you. When you go in to have an appointment with them, they will tell you that we are basing your treatment on what we’ve found that worked with women. So wait a minute, you’re saying that not only do I have a “woman’s disease”, you are going to treat me based on everything you know about woman. Ok, but I have a penis, isn’t there anything that tells you what to do in the case of a man with breast cancer?

I will join everyone else who fights breast cancer, men and women. When life hands you lemons (or lumps), what do you do? I will make Lemonade, Lemon Meringue Pie, Lemon Chicken, and the list of all things lemon flavored will be infused with the lemons that I’ve been given. I will advocate awareness of male breast cancer. I will tell everyone I can that, yes it is true, men can get breast cancer too!