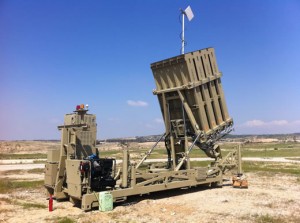 During what has come to be known as the First Gulf War in 1991, Iraq bombarded Israel with Scuds (tactical ballistic missiles) that were believed to be armed with poison gas. The Israeli population was equipped with emergency kits that included a gas mask and filter and an atropine syringe. When the air raid sirens sounded, we were to put on the gas masks and go into a hermetically sealed room, sealing the door after we entered. It was terrifying.

At that time I was recovering from spine surgery related to my injury in the bus bombing. I was in pain and moved with great difficulty. A caregiver came to my home every morning to help me bathe and fix my breakfast, and I spent most of the day in a wheelchair. I couldn’t raise my arms high enough to put on the gas mask by myself; I was dependent on the person I lived with to help me with the mask and to seal the room whenever the sirens went off. I’ve lived through some very frightening times, but this was among the scariest.

That was twenty-three years ago and I don’t often think about it any more. I no longer have flashbacks or intrusive memories, not for many years. So I was surprised by the severity of my anxiety these days when the Red Alert sirens sound, giving Jerusalemites about a minute and a half to take shelter before a rocket attack.

There are no longer those fears, ultimately proved baseless, of gas attacks, so we don’t have to put on our masks, but the rockets are very real. There is a bomb shelter just a few meters beyond my garden gate, but there is no way on God’s green earth that I could get out of my chair or bed, out the door, go along the path to the gate, unlock the gate, and go down to the corner to the bomb shelter in 90 seconds.

It’s not spine surgery this time, but the ravages of cancer and cancer treatment that impede me. The pain (always the pain), the balance issues, the neuropathy… It took several days of sitting with my anxiety and reaching out for help to get through it before I realized that in my inner world I was tapping into that old anxiety from the Gulf War and attaching it to the anxiety of the bombings in the present. Having reached that realization, I was not surprised to find that the level of my anxiety had greatly decreased.

I am far from blithely insouciant, but reality has come back to my inner world. When the siren sounds I go to a little corner that is relatively safe. I bring my iPad (with links to my medical and other personal document files in Dropbox), my telephone, my week’s meds, a pillow to sit on. I feel anxious, but also confidence that I’ve done everything I can and it’s out of my hands. I pray. Sometimes I put up a Facebook status, but now that I’m calmer I’m not writing it in all caps anymore. I no longer live with constant generalized anxiety, and I’ve even started sleeping again at night.