Whose Cancer Is It, Anyway?

I recently read a blog by Dr. Danielle Ofri in the New York Times “Well” blog about how as a physician she learned to respect the patient’s wishes even when they contradict her professional inclinations. It’s called Doctor Priorities vs Patient Priorities” She writes that the patient is looking through a “wide-angle lens” that takes in the whole of his life while the doctor’s lens is “narrowly focused on the disease that pose[s] the gravest and most immediate risk”. She saw her challenge as entering into dialogue with her patient in order better to understand the wider perspective of his whole life and to work with him to find the most acceptable way to deal with his disease.

If only Dr. Ofri were an oncologist. If only she were my oncologist. My last appointment with my onco, Dr. G, was a disaster. Not only have I not been back to her, I have not gone to any oncologist since then. Part of that is because I don’t want any treatment at this time; that’s still true. But if I am going to be very honest, and I try to be that always, it is also because of that disastrous appointment with Dr. G. 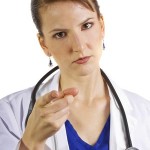 First of all, she would not respect my decision not to have any more chemo and refused to order any scans unless I would a priori agree to chemo if she decided it was indicated. She also mocked me. It took a long time for me to tell that second bit. In fact, from that day in August 2013 until just recently—seven months!—I only told one or two other people about what happened.

The evening of that last appointment, Dr. G called me at home to continue the argument. I found myself apologizing for causing her distress. Yes, I know that’s ridiculous, but that is how I react to being bullied. Borrowing the words of a friend who really gets it, I apologize to others for their hurtful behavior and then I internalize it. I haven’t talked about Dr. G mocking me because I feel ashamed.

A couple of years ago I wrote about being bullied.  I wrote about how after almost half a century the memory of being bullied as a child can still bring tears to my eyes. But, as I keep repeating: feelings are not the boss of me! It is time for me to sit with the very uncomfortable, painful feelings of being bullied so that I can move through them and release myself from their pernicious hold.

Dr. G was unprofessional, rude and mean to mock me. But it was the jeering of that girl gang in 1967 that held me back from responding as a mature adult. It was those little girls who had me backed into the corner of a school lavatory who made me apologize to Dr. G for her own bad behavior.

Well then. The problem is defined now and I know what I need to do to resolve it. It won’t be fun and it won’t be pretty, but at the end of the process I will have made significant progress toward being whole, being free, and being at peace with my past and my present.