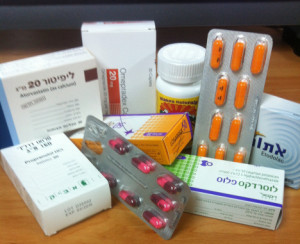 In what may be the unkindest cut of all, having cancer doesn’t give you a pass on all the other ailments of (in my case) middle age: GERD, high cholesterol, high blood pressure, joint pain… I am dying of cancer but I want to be as comfortable as possible until then and I don’t want a heart attack or a stroke to put a cramp in my style while I’m waiting for the cancer to kill me. Put all this together and it spells lots of medicine.

To the left here you can see some of what I take every day. Unlike the United States, where patients receive their pills in a little vial with a label on it that, among other information, tells you how to take them, here in Jerusalem we get our medicine in boxes of bubble packs. There is no label on the box, especially when it’s something you take on a regular basis.

Now, I’m all in favor of taking responsibility for my health, but today I had a very scary experience. I came up face-to-face with the decline of my intellect and the dependence on others that is approaching as I move steadily toward the end of my life. It was a little thing, maybe, but incredibly significant to me and I took it hard.

The medicines for the coming month were all in front of me on the table and so was the partitioned case for me to put out my week’s meds. A looked at the case and I looked at the boxes and bubble packs and… suddenly went blank. Which one is in the morning and which is at night? Is this the one I take two of or is it the half-tablet? Wasn’t there something that isn’t every day or was that only because of the tests? What do I do with all this?

I was looking at the end of my life, not in three decades or more, but in just a couple of years. (I like to say I have two to five years left, but I pulled that number out of the air.) The end of my life.

Yes, yes, we are all going to die, and no one knows when. Take that as read. I get it. Yes, a rocket could fall on me or a car could hit me or my computer could electrocute me. I get it. But that is all very unlikely. It is not only likely but quite certain (barring an act of God, which by their nature are very rare) that I will die of metastatic disease and I will die of it very soon.

This might be one reason that chemo brain upsets me so much. I can manage the actual deficits with the little tricks and methods I spent my nursing career teaching patients. But it is almost a dramatic foreshadowing of what awaits me just a little ways down the road.

I find myself with a new understanding of Dylan Thomas’s famous poem. Maybe the rage is not at “the good night”, death, but at “the dying of the light” – the decline of one’s faculties.

Do not go gentle into that good night,
Old age should burn and rave at close of day;
Rage, rage against the dying of the light.

Though wise men at their end know dark is right,
Because their words had forked no lightning they
Do not go gentle into that good night.

Good men, the last wave by, crying how bright
Their frail deeds might have danced in a green bay,
Rage, rage against the dying of the light.

Wild men who caught and sang the sun in flight,
And learn, too late, they grieved it on its way,
Do not go gentle into that good night.

Grave men, near death, who see with blinding sight
Blind eyes could blaze like meteors and be gay,
Rage, rage against the dying of the light.

And you, my father, there on the sad height,
Curse, bless, me now with your fierce tears, I pray.
Do not go gentle into that good night.
Rage, rage against the dying of the light.