The Solanum: A Story 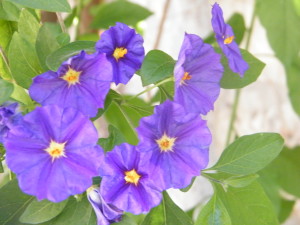 Once upon a time there was a little middle-aged lady who didn’t feel well. She had an uninvited guest that had come to stay. The guest stayed and stayed and just wouldn’t leave. Sometimes the guest stayed quietly in a back room, so quietly that she barely remembered it was there. But at other times, the guest would rampage through the house, breaking things and making terrible messes and leaving nothing but destruction in its wake.

This was one of those times. The lady was angry at the destruction left by the uninvited guest. She was frustrated at her own helplessness and inability to evict the guest. She was very, very sad at this impasse. The lady was full of uncomfortable feelings and didn’t know what to do.

She sat outside her little house and gazed blankly at her little garden. The flowers weren’t blooming and that made her feel even sadder. “Even the flowerbed seems to be in darkness today,” she thought to herself.

“Wait… darkness? That doesn’t make sense. It is a bright summer’s day, there is not a cloud in the sky. Strange.” Looking up, up, up, the little middle-aged lady’s eyes fell on the big solanum that was blooming abundantly, thank you very much. “Aha!” she thought triumphantly. “That’s the problem!” In fact, the solanum, much like her uninvited guest, was taking up more than its allotted space and keeping the sun away from the geraniums and the chamomile and the marguerite and all the other flowering shrubs.

The little middle-aged lady got up and went to the garden shed. She put on her pretty yellow gardening gloves and armed herself with the blue-handled secateurs. “I can’t do anything about the uninvited guest in my house,” she said to herself, “but dang skippy I can take sure care of that solanum.” So she cut and cut and cut.

An hour later, with scratches on her legs and sweat on her face (for it was a sunny summer’s day, after all) and a deep sense of satisfaction in her heart, she stood back to admire her work. “There, that should take care of it. Now the sunshine can reach the other plants in the flowerbed and they will start to bloom again. Good work, self,” she said to herself.

The little middle-aged lady no longer felt sad and angry and frustrated. Even though her body was very, very tired after the work, her spirit was soaring and her soul rejoiced at the thought of the many-colored flowers that would soon fill her garden again.

She took off her yellow gloves and put the blue-handled secateurs back in the shed and went into her little house and ate some watermelon.

If you would like to know more about my cancer/uninvited guest metaphor, please take a look at Have I survived yet, Part I.